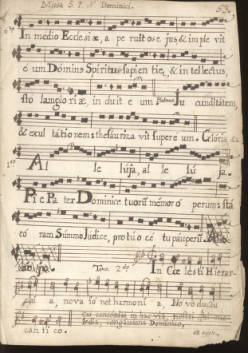 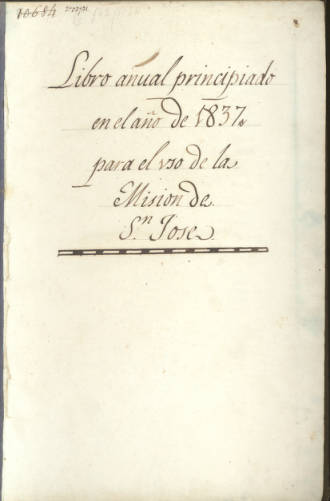 Click the image to view selected digital versions of items from the Mission Accounts. 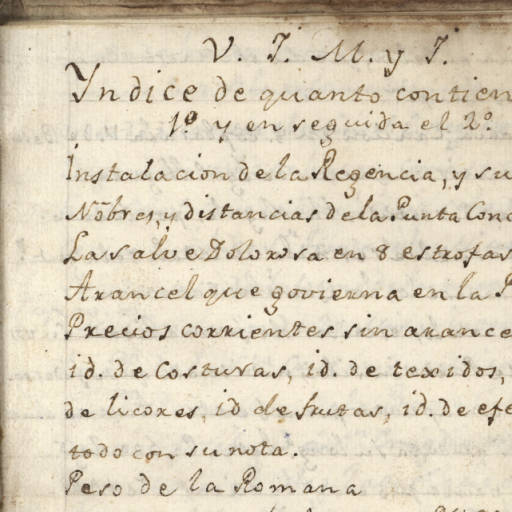 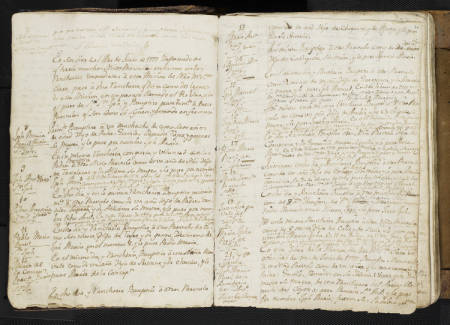 The Mission Santa Clara Manuscript Collection, 1777-1903, 1958, 2002 (bulk 1777-1851), consists of hundreds of manuscripts written, collected and used by the Franciscans at Mission Santa Clara, from the founding of the Mission in 1777 until the arrival of the Jesuits in 1851. The Franciscan missionaries wrote and collected numerous and diverse documents, including sacramental records, account books, annual reports, letters, choirbooks, and instructions on health care and cuisine, among others. The majority of the manuscripts are in Spanish.

The collection is open for research.

Materials in Archives & Special Collections may be subject to copyright. All requests for permission to publish from manuscripts must be submitted in writing to the University Archivist. Permission for publication is given on behalf of Archives & Special Collections as the owner of the physical materials, and is not intended to include or imply permission of the copyright holder, which must also be obtained. Copyright restrictions also apply to digital reproductions of the original materials.

Mission Santa Clara was founded in January of 1777 by the Franciscan Friar Tomás de la Peña on the banks of the Guadalupe River. The Mission relocated four times until it was finally established at the current site in 1825. Mission Santa Clara was the eighth of 21 Franciscan missions established in Alta California (Upper California) throughout the years 1769-1823, as Spain attempted to consolidate its power in the region as well as to evangelize its native population. These missions were governed by the Colegio de San Fernando in Mexico City until 1833, when Mission Santa Clara and other northern missions were entrusted to the Colegio de Nuestra Señora de Guadalupe in Zacatecas, Mexico.

Mission Santa Clara was established in the land of the Ohlone people; however, over time, other indigenous groups including the Yokut and the Miwok joined the Mission. In 1823 the Indian population of Mission Santa Clara ascended to 1,395. The Franciscans devoted themselves to their spiritual duties, in that they taught the Catholic doctrine and dispensed the sacraments to the Indians (and also to those who lived in the pueblo of San José). But the Franciscan missionaries had other responsibilities, for Mission Santa Clara was not only a church, it was an extensive and complex institution which included housing for the missionaries, the Spanish troops, and the Indians; the kitchen; the cemetery; agricultural fields; grazing lands for the cattle; a corral and slaughter yards; a tannery; a granary; manufacturing sites for textiles and adobe blocks, as well as a threshing floor for the grain. By the 1830s Mission Santa Clara administered 80,000 acres of land, and it also owned thousands of heads of major and minor livestock and produced substantial quantities of various crops.

The 1830s marked a definite transformation in the history of the California missions, including Mission Santa Clara, for in 1833 the Mexican government (Mexico had gained its independence from Spain in 1821) decided to secularize these missions. Secularization intended to transfer the mission churches from the Franciscans to the secular, or diocesan, clergy, to appoint a lay commissioner to administer the mission property, and to distribute some of the property among the population. Mission Santa Clara was secularized in December of 1836. The Franciscans continued to direct the spiritual affairs of the mission since there was no secular clergy to replace them, but the Mission’s vast landholdings were partitioned (benefitting mainly the social elite). The Mission Santa Clara population rapidly fell, and by 1845 only 130 Indians remained.

In March of 1851, Bishop Joseph Alemany turned Mission Santa Clara over to Father John Nobili, S.J. The Jesuit was to act as parish priest and to open the school that would become Santa Clara University.

The Mission Santa Clara Manuscript Collection, 1777-1903, 1958, 2002 (bulk 1777-1851), consists of hundreds of manuscripts written, collected and used by the Franciscans at Mission Santa Clara, from the founding of the Mission in 1777 until the arrival of the Jesuits in 1851. The Franciscan missionaries wrote and collected numerous and diverse documents, including sacramental records, account books, annual reports, letters, choirbooks, and instructions on health care and cuisine, among others. The majority of the manuscripts are in Spanish. The collection is arranged into nine series: Series I: Sacramental Records; Series II: Informes (Mission Reports); Series III: Fr. Viader’s Miscellany Book; Series IV: Ecclesiastical and Governmental Correspondence; Series V: Secularization and the Formation of California’s First Diocese; Series VI: Personal Legal and Financial Records; Series VII: Music Manuscripts; Series VIII: Alta California Manuscripts; and Series IX: Pictorial Materials, Ephemera and Reproductions.

This project was generously funded by Michel and Mary Orradre, long-time benefactors and friends of Santa Clara University.